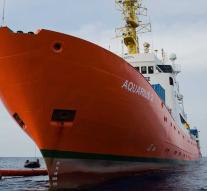 valletta - A solution was found for the 58 migrants aboard the ship Aquarius, which was sailing off the coast of Libya. They are brought to Malta and distributed over four countries in the EU. That's what sources around the Maltese government have stated on Tuesday.

The Aquarius was the last rescue ship operating in that part of the Mediterranean. On Sunday it was announced that Panama was deleting the registration of the vessel.

Panama would have granted a request from the Italian government. The Italians had lodged the claim with Panama because the ship did not return the refugees who had been admitted to their countries of origin.