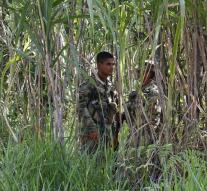 bogota - The Colombian guerrilla group ELN has slain in a bloody attack on security forces certainly eleven soldiers and a policeman. They were in a mountainous region in the northern department of Boyaca ambushed and surprised with explosives and shot.

The soldiers accompanying a group of election officials and transported vote Sunday held regional elections, with governors and mayors were elected.

In addition to the twelve dead six people missing. This is according to the Ministry of Defence to two soldiers, a policeman, two election officials and a member of the Uwa tribe.

AND the rebel group, the National Liberation Army, after the FARC, the largest guerrilla group in Colombia. The group has about two thousand combatants. The ELN, founded by radical priests, is negotiating with the government to come to terms for a peace process. " This shows that the ELN has not understood that it is now time for peace and not for war ", president Juan Manuel Santos responded to the violence. " If the ELN believes that these acts strengthen the position in the final negotiations, they are wrong. " Santos announced that the army is going tougher action against the rebels.

Colombia has a long history of conflict between leftist rebels, right-wing paramilitaries and government forces. In fifty years in the violence more than 220000 deaths.