Home / World / 'Soldiers told US too much to Iran ' 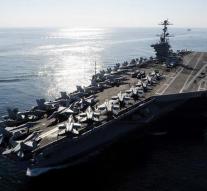 - American soldiers who were in two boats from Iran in the Persian Gulf early this year arrested have been released too much information during their interrogations by Iran. Their arrest was a result of a series of errors of the leaders and the crew of the vessels. This is contained in a report on the matter which was published Thursday.

The ten soldiers were captured by members of the Revolutionary Guards on January 12 when they landed in Iranian territorial waters. They were in two boats en route from Kuwait to Bahrain. They were released a day after their arrest.