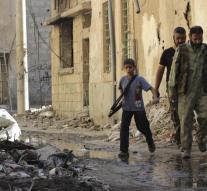 london - Three Syrian soldiers have been slain by airstrikes likely to be carried out by the international coalition against terror organization Islamic State (IS). The attacks were carried out in the province of Deir al- Zor in eastern Syria, reported the London-based Syrian Observatory for Human Rights Monday.

A source has confirmed to the government in Syria that by airstrikes soldiers were killed and that vehicles have been destroyed.

According to the Observatory, which relies on sources in the area, it was an attack on a military camp in the place Ayyash, north of the provincial capital of Deir al- Zor. Fourteen soldiers were wounded.

It is the first time that air strikes are carried out on the Syrian army may happen by accident.