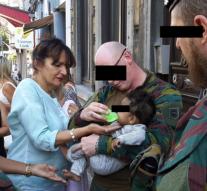 - Soldiers have a baby rescued Wednesday afternoon in a sweltering car in the Belgian town of Verviers.

Concerned passers warned the military. They heard strange noises coming from a car and then saw that a crying baby sounds came from, who was alone in the car.

The military immediately broke open the lock of the car upon arrival. The baby would have been stuck in the car a total of about 45 minutes.


The baby's mother questioned by police.