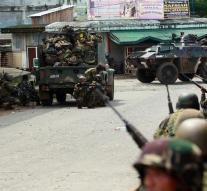 marawi - The Philippine army sent about one hundred soldiers with helicopters to the city of Marawi on the southern island of Mindanao. Dozens of Muslim extremists occupied large parts of the city and burned several buildings, following a failed collapse of security forces in one of their shelters.

Since this action Tuesday evening, at least 21 deaths have occurred in Marawi: seven government soldiers, thirteen rebels and a citizen. According to religious leaders, rebels have taken Christian residents into hostages to use them as human shields. The extremist group Maute swore earlier to the Islamic State terrorist group.

READ ALSO: Fight against march IS in southern Philippines

President Rodrigo Duterte has announced on Mindanao the state of siege. An army spokesman said that in Marawi some tens of 'local terrorists' resisted.

The night-lashed fighting resumed Thursday when the army pushed up to a bridge held by Maute. The army put in two helicopters from which the rebels with machine guns were bombarded. Trucks were ready to evacuate fleeting citizens.

The Maute proved to be a foolish opponent. IS confirmed the ties with the group Wednesday through his mouthpiece Amaq.

There was nothing known about the fate of the hostages of the rebels, including a priest and ten other Christians.

The army has not yet given a statement that could trigger the invasion of Tuesday on a city war. The operation was intended to capture Isnilon Hapilon, a leader of the terrorist group Abu Sayyaf. According to information from the army, Hapilon is still in the city.