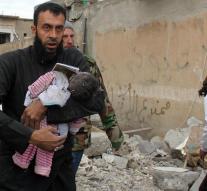 antalya - Commanders of the armed forces of Russia, Turkey and the US on Tuesday in Antalya, Turkey unannounced gathered. The concert is the first of its kind and is going according to Turkish and Russian media on the situation in Syria and Iraq. The three countries they interfere militarily in the conflict in Syria and Iraq.

In the meeting in Antalya came the chiefs-of-staff of the three countries, the US General Joseph Dunford, his Russian colleague Valeri Gerasimov and the host, General Hulusi Akar.

They fight all three Sunni extremists, but they also support battle groups that fight each other. For example, the US supports rebels who are led by Syrian Kurds. Russia supports the army of Syrian President Assad. Turkey supports rebels fighting Assad's troops and wards against Kurdish militias. Ankara has repeatedly urged Washington to stop supporting militias of the Syrian Kurds.