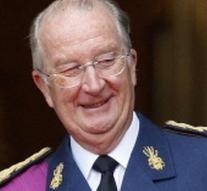 brussels - The former Belgian King Albert II is expected in February at the Brussels court. Then scheduled a hearing with Delphine Boël, the woman who certainly knows to be his biological daughter. Her legal father Jacques Boël is called, Belgian media report Tuesday.

Delphine Boël (48) trying for years done through the courts to get the 82-year-old prince recognizes her and undergoes a DNA test. Incidentally, no one doubts that Boël is his daughter.

The hearing is scheduled for February 21st. As Albert puts forward a 'legitimate excuse' not to come, the court may authorize his absence.

The Constitutional Court in particular Belgium in February that Boël should continue struggle for recognition. Her right to obtain clarity about its origin, according to the court is more important than the rest of the royal family.