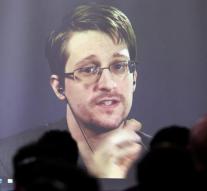 moscow - Whistleblower Edward Snowden has been told he can stay for a few years in Russia. A spokesperson of the Russian Foreign Ministry said Wednesday.

'Snowdens permission to stay in Russia has just extended for several years,' the Russian spokeswoman Mary Zacharova announced through Facebook.

The United States wants the former employee of the CIA and NSA security service that leaked documents about US spy in 2013, still try.