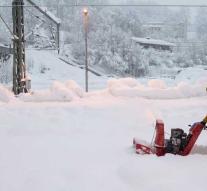 munich - The snow chaos in the Alpine region has claimed at least twelve lives this week. On Thursday, a 9-year-old boy came under a falling tree in the German Trautshofen in Bavaria. He died in...

Other victims were affected by snow avalanches. One woman stumbled, fell into the snow and suffocated, while another hiker was killed by a broken tree branch. In Bavaria, the German army was deployed to alleviate the worst needs. Places are closed off from the outside world and roofs are threatening to collapse under the heavy snow load.