Home / World / Snow and frost up in Southern Italy 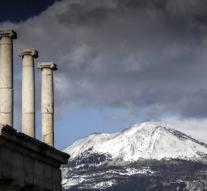 rome - In Italy speaks of a real Epiphany Snowstorm. The north is accustomed to winter weather, but also desire for the rest of the Mediterranean country under freezing temperatures and snowfall. Rome turns up the temperature below freezing and Vesuvius near Naples is covered with a layer of snow. Even on the Aeolian islands between Sicily and the mainland are snowflakes settled, ANSA news agency reported Friday.

Due to bad weather at sea remained the ferries to and from these and other Italian islands on the quay. In Avenillo, east of Naples, was a 44-year-old homeless killed by the cold. In the southern Bari, the capital of the Apulia region, was about 15 centimeters of snow.

The exceptional cold and precipitation have here and laid flat rail. Also on the road problems arose.