Home / World / Sánchez back as leader of Spanish socialists 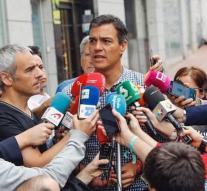 madrid - The Spanish Socialist Party PSOE has chosen Pedro Sánchez as her new leader. Sanchez, who had already preceded the Socialists, defeated the Andalusian headline Susana Díaz and Basque outsider Patxi López Sunday in an election.

Sanchez was chosen as leader of Spanish socialists in 2014. Last autumn, Sánchez stepped up and the PSOE came without a party leader. The socialists had paved the way for a minority government of the Conservative People's Party (PP) from Prime Minister Mariano Rajoy. Sánchez could not find himself.

Despite his objections to the despair of the minority government of Rajoy, Sánchez again became a candidate for the post of Secretary General of the PSOE.