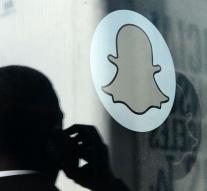 amsterdam - Snapchat will next month open an office in Amsterdam, which focuses on the Benelux and Scandinavia.

Joost Hagesteijn, currently director of AOL Netherlands, would result in the Netherlands reportedly Snapchat. Snapchat is the world's fastest growing social network and wants to go public in 2017. In prepare to do so would open several local offices rapidly.