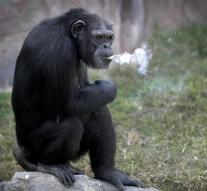 pyongyang - The newly opened zoo in the North Korean capital, Pyongyang has a new star: Azalea the smoking chimpanzee.

The 19-year-old chimpanzee, called Dallae, smokes a pack a day off. But she could not inhale, as claimed by the directors of the zoo to news agency AP.

Dallae can light her own cigarette with a lighter of a caregiver. If that is not available it uses a different cigarette to stabbing with a new one.

In the West would lead to a smoking monkey angry reactions, but North Koreans seem to love it. Many people laugh when they see smoke sitting on her rock the animal. Her trainer let her do a dance and make a bow, to the amusement of the North Koreans.\n  \n  \n   advertisement

The zoo attracts thousands of visitors each day has further elephants, giraffes and penguins. But what you might not easily expect the popular dog pavilion, where all kinds of dog breeds are admired.

Other animals do tricks for the crowd. There is a monkey holding a basketball may fit, dogs that can add and subtract and pigeons involved in a skating show.

The zoo was closed in 2014 because of a major refurbishment. Last July, the zoo opened back.