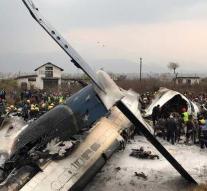 kathmandu - A chain-smoking and fiercely agitated pilot caused the crash of a passenger plane in Nepal, killing 51 people in March. In a research report, which has not yet been officially published, it says that the pilot had to cry and snort repeatedly during the flight of US-Bangla Airlines.

Comments from a female colleague would have been the cause of his emotional moods. She would have questioned the qualities of the former air force pilot. 'This mistrust and stress led him to smoke in the cockpit all the time and led to various emotional breakdowns during the flight', says the report that has been partially seen by news agency Reuters.

The passenger plane crashed during the landing at Kathmandu International Airport. The pilot did not follow the instructions of the control tower and did not get the plane in balance in time. There were 71 people on board. The pilot was one of the dead.