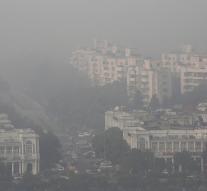 - Not only cities like Beijing contend with dangerous amounts of smog. The same fate also affects New Delhi, capital of India. At this time, the air in the city is dirtier than ever, Indian media report Thursday.

The smog reaches values ​​of 400 to 500 points on the air quality index, where the World Health Organization, a value of up to 25 calls still justified. On Friday, the city council measures.

The biggest polluters in New Delhi are coal plants, car and truck traffic, waste incineration and brickyards. Also fire which is cooked and that homes are heated, giving much air pollution. In the Indian capital housing 17 million people.