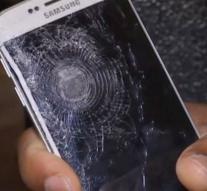 paris - A smartphone has saved the life of one of the witnesses of the attacks in Paris.

So says the man, Sylvestre, in an interview with the station iTele. He says he was outside the Stade de France when a bomb went off. " The explosion was in front of me. I felt particles flying past me and attacked by the slap on the ground, " said the man.

When he got up again and looked at his smartphone, he saw one of shrapnel or a bullet had hit the unit. " That saved me. Otherwise my mind there certainly cut vengeance. "