Home / Tech / ' Smartphone being used to shop along ' 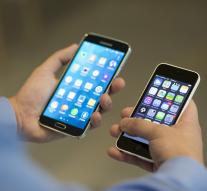 - The number of online purchases through the smartphone has increased according to research from the online store industry significantly. In the third quarter of Dutch consumers bought almost 2.2 million times what with their cellphones. That represents an increase of 42 percent compared with the third quarter last year.

The average price of purchases with the smartphone was slightly higher : 54 euros, against 47 euros a year ago. According to market researcher GfK, which collected the figures commissioned by industry club Thuiswinkel. org, the share of the smartphone market within the overall online now 7 percent.

Online stores do brisk business across the board. More and more people are buying stuff over the internet. In the first three quarters of this year were placed over 100 million orders, worth a turnover of nearly 11.4 billion euros. Consumers bought 17 percent more than the same period in 2014.