Home / World / Small protests at the start of entry ban US 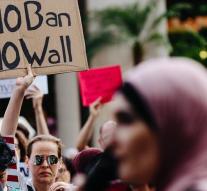 chicago - The entry ban for some of the travelers from six Muslim countries by the United States started Thursday night (local time) without incidents. At many major airports there were a handful of protesters against the government of President Donald Trump. Attorneys also reported at the airports.

The protesters protest against the entry ban that this week was partially approved by the US Supreme Court. Shortly before the start of the ban on Thursday night, the state of Hawaii announced that it had brought a lawsuit against the government about part of the ban. The state previously prosecuted successfully against an earlier version of the ban.

Attorneys are present because legal withdrawal is expected when travelers from Iran, Libya, Somalia, Sudan, Syria and Yemen are not allowed in the United States. People without family, work or a company in the United States can be denied access to the country.