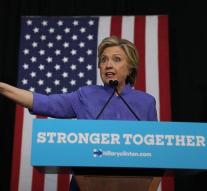 - Hillary Clinton is slightly dropped in the polls. That is a result of the announcement by FBI Director James Comey that new e-mails have surfaced that the Democratic presidential candidate may be involved. That is now being verified.

A study presented Sunday by ABC / Washington Post showed that about a third of the voters tended to vote for Clinton by this news have been worse again in doubt. Support for Clinton in the 'maybe-camp dropped to 46 percent, only 1 percent more than Donald Trump. That contrasts with the huge advantage they had a week earlier undecided voters in this category.

In the poll by CBS in thirteen swing states, where the uncertainty is still large, said 71 percent of respondents that this disclosure will not affect their voting behavior.

The campaign leaders Clinton on Sunday once again expressed their outrage at the actions of Comey right before the elections and urged him to explain the significance of the emails are found. According to the Washington Post knew the FBI for weeks before Comey made mention of its existence.