Home / World / Slovenian gay men: to get married, do not adopt 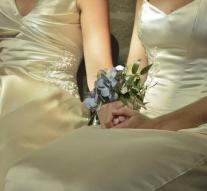 ljubljana - Slovenia may marry gay people since Friday. They largely have the same rights as heterosexuals, but gay couples can not adopt children. Saturday in Maribor, the second largest city in the country, the first lesbian wedding, civil status informed.

The new law was passed in Slovenia ten months ago. This happened after a referendum in 2015, voters in the largely Catholic country have picked a line through the right of gay couples to adopt children. Also, artificial insemination is not allowed married lesbians.

In several countries of the European Union gay marriage recognized by law, but the issue remains controversial in some EU countries.