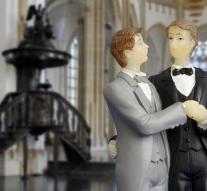 ljubljana - A large majority has voted Sunday in a referendum in Slovenia against gay marriage. Nearly two-thirds of voters rejected gay marriage, reported the authorities in the capital Ljubljana.

The opposition to the government of Prime Minister Miro Cerar and the Roman Catholic Church had made a case for rejecting the controversial marital union. The Government of Cerar had opened marriage in March for people of the same sex.

Which ceases on the referendum, but it does not work retroactively. Already registered gay marriages remain valid.