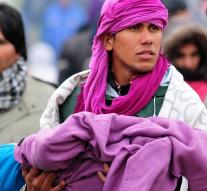 rigonce - The amount of refugees that pulls through Slovenia to the west of Europe, remains enormous. More than 1,300 refugees in the night from Friday to Saturday from Croatia come across the border. In the small border village Rigonce, which counts only 170 inhabitants, in the last 24 hours have passed only 13,000 refugees.

Among the migrants were many women and children, who could only partially protect against the cold and wet weather. In Sentilj, near the border with Austria, expect around 4000 people to be allowed to cross the border. They want almost all to Germany.

Slovenia has already indicated on several occasions to the large influx of refugees can not. The country, the EU has requested assistance from police officers. Also wants to call the reservists and retired police officers to address the problem head on.