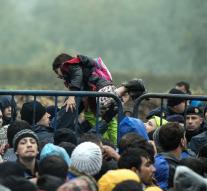 ljubljana - Slovenia has Monday received 5000 immigrants, twice as much as it can record in his own words . In addition, another 1200 refugees a train en route . That the Ministry of Interior in Ljubljana on Monday.

Slovenia has criticized Croatia for its lax attitude of that country, so that migrants can travel unhindered through to Slovenia . Austria and Germany in turn ask Slovenia to curb the flow of refugees. The Slovenian authorities announced Sunday knowing a daily maximum of 2,500 to 3,000 refugees to register and send it to Austria.