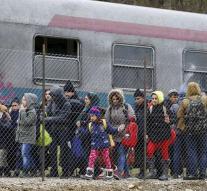 ljubljana - The Slovenian parliament Monday decided to deploy the army to assist the police in controlling the flow of refugees. The army will initially assist the officers three months.

The country of two million inhabitants between the Alps and the Balkans lies on the 'Balkan route' taken by immigrants from Greece towards Western Europe.