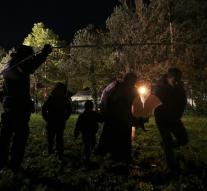 ljubljana - The Slovenian government wants the army committed to the control of the border , because the border police this not only can handle. That the Slovenian prime minister Miro Cerar Tuesday on the radio said.

A bill on the use of the army at border controls is Tuesday debated in parliament. " On the migration route through the Balkans, Slovenia is the smallest country. Hence the limited ability to control borders and migrant absorb ", said the Slovenian government said in a statement . Slovenia calls to help Member States of the European Union in dealing with immigrant issues.

Slovenia has Monday received around eight thousand refugees. Of that group, there are about two thousand traveled to Austria.