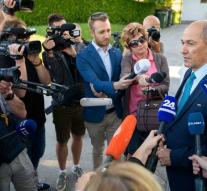 ljubljana - The right-wing SDS party seems to have received the most votes in the Slovenian elections. The opposition party, who wants to implement a strict immigration policy, can count on more than 24 percent of the votes according to an exitpoll.

The 1.7 million voters in the Central European country had the choice between no fewer than 25 parties. The center-left LMS seems to be the second party of the country with 12.6 percent of the votes. Party leader Marjan Šarec has already indicated that he does not wish to form a coalition with the SDS of former Prime Minister Janez Janša.

Janša acknowledged on Sunday that his vote would not be easy to form a government if his party won the elections. He presumably needs the support of several parties to get a majority in the ninety-seat parliament.