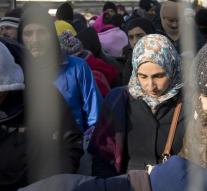 ljubljana - Slovenia allows only refugees who are planning to travel to Austria or Germany. That the Minister of Internal Affairs Vesna Györkös Znidar Thursday declared.

The country will also introduce stricter border controls, said the minister. The announcement comes a day after neighboring Austria announced that it would set a limit on the number of migrants allowed.

Slovenia already has fences along the border with Croatia put down in order to control the flow of refugees better.