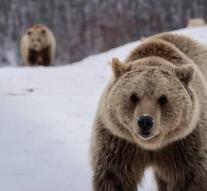 ljubljana - The Slovenian authorities give hunters the green light this year 93 brown bears and to shoot eight wolves. That should prevent the animals increase in number, the government reported Thursday.

More than half of Slovenia's territory consists of woods, where some fifty wolves and bears live about five hundred. Slovenians who live near the forests, frequently complain about the damage caused by the animals on their farms.

The Government is therefore determined to keep control animal populations. Last year, 83 bears and four wolves slain in the country.