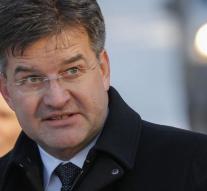 - Slovak Foreign Minister Miroslav Lajcak wants European politicians moderate their criticism of Turkey. Turkey is a strategic partner of the European Union and plays an extremely important role in solving the migration problem, Lajcak said Friday after a brief visit to Ankara.

,, It's better with this partner to conduct a dialogue and open conversation, instead of each other to black through the media, 'said the minister. Slovakia since 1 July for six years president of the European Union. On September 16 enters the host at an informal summit in Bratislava on the future of the EU.

Prior to consult the Foreign Ministers of the EU Member States on 2 and 3 September in the Slovak capital, which among other things discussed the EU's relationship with Turkey. According to the Slovak Ministry of Foreign Affairs Lajcak also provide consultation invited a Turkish representative.