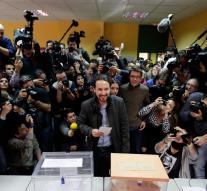 - In the parliamentary elections Sunday in Spain emerges with more than 58.3 per cent a slightly higher turnout than four years ago (57.6 percent). The difference is very small country, but according to Spanish media the turnout in certain regions measured around 18:00 a lot higher than in 2011 and in some regions is much lower.

For example, in the regions of Madrid and Valencia, Cantabria and Catalonia there were more voters than in the previous parliamentary elections. Approximately 36.5 million Spaniards are eligible to vote. They are expected to choose a Spanish lower house that is no longer dominated by one party. The Government would as from Monday rely on coalitions.

The current government of the conservative People's Party (PP) of Prime Minister Mariano Rajoy could not only continue governing. Possibly the PP remains the largest thanks to a slight recovery in the economy.