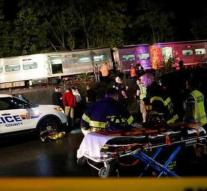 new york - Two train accidents in New York and New Jersey in 2016 and 2017 were due to a sleep disorder of the driver. The chairman of the research committee of the National Transport Safety Board (NTSB) has announced this.

Both drivers suffered severe sleep apnea, temporarily stopping breathing during the night's rest. Because of this they had become exhausted and occasionally disappeared during the day during their work.

In Hoboken, New Jersey, in September 2016, a train drove into the bus station without any real braking due to carelessness by the driver and banged on the fenders. A woman was killed, 110 passengers were injured. The material damage was great. In January 2017, a local train ran out of the rails in the New York borough of Brooklyn. More than a hundred wounded also fell as a result of this derailment.

A doctor from the NTSB said in The New York Times that the diagnosis of sleep apnea can easily be made. He advised the railway companies to have their personnel checked in the responsible positions. That is now far too little. A proposal to make routine research mandatory did not make it last year.