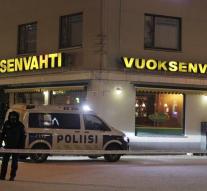 - Three women were shot dead Saturday night at a restaurant in the Finnish town of Imatra. Police have arrested a suspect, a 23-year-old man.

About the motive for the triple murder is still unknown. Police said Sunday the arrested man not to have heard.

When the shots fell shortly before midnight, a police car was close by. On the evidence of witnesses the accused could be arrested soon. The murders were allegedly committed with a gun, as reported Finnish media.