Home / Tech / Slack and Google to work together 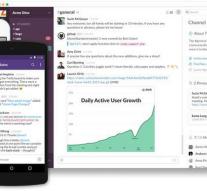 Slack is a platform by users themselves can be extended with useful features. One of the most popular features was the addition of Google Drive Slack. Which 'integration' is now easier. No longer be sent notifications about Drive files Slack in an e-mail. Instead, it is a special Drive Bot, a chatbot that puts the notifications Slack. The chatbot, moreover, gives the user the opportunity to, for example, to reject changes.

Google Drive came recently with a special version for groups of colleagues: TeamDrive. Also, which is added to Slack. In addition, it is possible to preview documents Slack. Downloading a file or Slack leave is no longer necessary.

According to Slack get the new features available in early 2017. It is reportedly only the beginning of closer cooperation between the two companies. With this cooperation, the need to fight with rivals Facebook and Microsoft at Work Teams. The latter has an advantage because it is part of the Office suite. Facebook at Work attracts users with the familiar look that has taken over from the 'normal' Facebook.