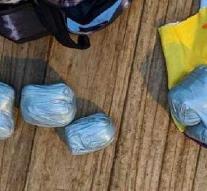 canberra - The Australian authorities have arrested four passengers from a ship that was in trouble. The suspects were without fuel and had been floating around for thirty hours when they could draw the attention of an airplane, reports Australian media. They were found to have a load of cannabis on board.

The boat had drifted off the coast of the Northern Territory. The crew members used the lamp of a telephone to reflect light on a jerrycan. In this way they attracted the attention of an overflighting aircraft from the Australian border security service.

According to the authorities, the men were very lucky because the water on board ran out. 'They had traveled about a quarter of the distance to Indonesia,' said a police spokesperson. ' They were in trouble when they were not noticed by the Border Force. ''