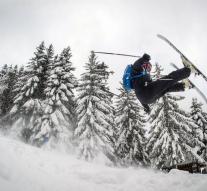 - In the southeast of Belgium is in many places still 10 centimeters of snow. More than a dozen ski slopes in the provinces of Liege and Luxembourg are open this weekend, the Belga news agency reported Saturday.

For example, there can be skied Sunday instance the Baraque Fraiture, south of the city of Liege. On the slopes of Monty Lierneux in the same region can not ski but the snow cover is good for bobsled. Skiing can also in Val de Wanne, 40 kilometers southeast of Liege.