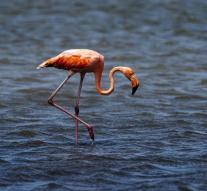 amsterdam - Sixty red flamingos have been found by the customs in Schiphol in coffins. They were traveling from Cuba to China. One of the birds had died and three were in a bad state. The flamingos are seized and are taken care of, according to a spokeswoman from the Dutch Food and Welfare Authority.

The birds have been hurt by the poor transport conditions. The inside of the boxes was not well finished, so the flamingos got stuck with their feet in vent holes. It is being investigated whether the export licenses (CITES) for this endangered species are in order.