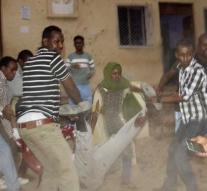 mogadishu - At least sixteen people were killed by a double suicide attack on a popular restaurant and hotel in the Somali city of Baidoa. About fifty others were injured. That reports the Somali police.

The terrorists, who almost simultaneously struck, wore bombs. The Islamist terrorist organization al-Shabaab demanded the attacks in a radio message. Baidoa lies about 200 kilometers west of the capital Mogadishu.

The attacks took place on the eve of the first anniversary of an attack on a busy intersection in Mogadishu, where more than 500 people died. Also behind this attack would be the Sunni fundamentalists of al-Shabaab.

Islamists are fighting for domination in the impoverished state in the Horn of Africa. The group associated with the terror network al-Qaeda wants to establish a strict Islamic regime in the country. A 22,000-strong force of the African Union supports the Somali forces in the fight against al-Shabaab.