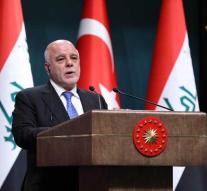 baghdad - Sixteen Iraqi political parties form a new block in parliament. The main parties in the new block are the party of Prime Minister Haider al-Abadi and his biggest challenger during the last elections Moqtada al-Sadr.

Prime Minister Al-Abadi won the elections earlier this year after a recount for fraud. At first the party of spiritual Al-Sadr seemed to have won.