Home / World / Six years in prison for Saakashvili in Georgia 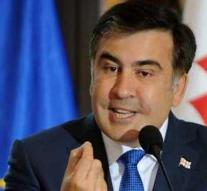 tbilisi - A Georgian judge sentenced former head of state Mikhail Saakashvili to six years in prison for misuse of power. The former president has gone beyond his book during his term of office and is partly responsible for the collapse of a member of the opposition in 2005.

The state television has announced this on Thursday. Other stakeholders also have to go into the cell for several years.

Saakashvili (50) was president of the former Soviet republic from 2004 to 2013. When he got the Ukrainian nationality after that period, he lost his Georgian pass. Saakashvili fell into politics last year in Kiev with President Petro Poroshenko and has been stateless ever since. Today Saakashvili lives in the Netherlands where he could get a residence permit because he is married to the Dutch Sandra Roelofs.