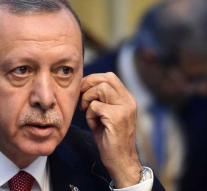 ankara - A Turkish filmmaker has been sentenced to a prison sentence of more than six years for membership in a terrorist organization. Ali Avci made a film that was based on the failed coup of 2016.

The authorities arrested Avci last year after the trailer for his film was released. It shows how an army officer directs his firearm to the head of President Erdogan. There were also images of murdered family members of the Turkish leader. That led to a lot of fuss.

The filmmaker denied the accusations. 'If I had wanted to make terrorist propaganda, I would have shown Erdogan as he made plans to flee,' Avci told the court in Istanbul. He finally ruled that the defendant is a member of the Fethullah Gülen organization, which according to Ankara is behind the coup attempt.