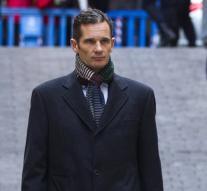 - The man of the Spanish Princess Cristina, Inaki Urdangarin, was sentenced by the court in Palma de Mallorca to six years and three months in prison for, among other scams, fraud, corruption and money laundering. 'Infante' Cristina itself is acquitted of complicity in tax evasion.

They have to pay a penalty of paying more than 265 000. The business partner of Urdangarin, Diego Torres is eight years behind bars.

Eight months the judges needed to reach a decision in this historic process. It was the first time that members of the Spanish royal family itself had to answer to a judge. The prosecutor and the organization Manos Limpias had taken nineteen years against Urdangarín. And although the Spanish OM renounced prosecution of Princess Cristina, the anti-corruption organization Manos Limpias also had eight-year prison sentence for her.

The scandal came in 2011 to light, when Spain went through a severe crisis. It has the image of the royal severely damaged- and created a separation between King Felipe VI. He has denied her the title of Duke of Palma. At the time of the verdict, he visited a museum in Madrid. He said 'maximum respect' to have the judge's ruling.

The lawyer of Princess Cristina says it 'welcomes the recognition of her innocence,' but that they 'remain convinced of the innocence of her husband.'