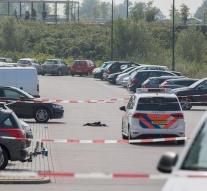 breukelen - The police received six tips on the fatal shooting party on Friday at the Breukelen station. That reports Nu.nl. The television program Detection Request requested attention on the matter on Tuesday.

The victim, the thirty-year-old Jair Wessels, was in his car at the time of the shooting incident. He later died in the hospital. Wessels was a criminal from Amsterdam-South.