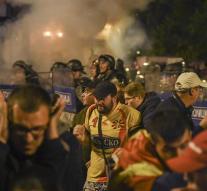 shopping - The Macedonian police arrested six people who would have participated in the tumultuous regime of parliament last Thursday. In addition, 109 people were injured, including three MPs.

According to the Macedonian television channel Alsat M, a senior security service official is among the detainees.

After the storm, the Ministry of the Interior announced a list of the names of fifteen persons responsible for the violence.

With the regime, nationalist supporters of ex-prime minister Nikola Gruevski wanted to nominate an ethnic Albanian as chamber president. The attackers, some of whom disguised, struck among other things with chairs around them.