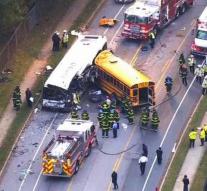 - have been six people killed in a bus accident in the US city of Baltimore. A driver of a school bus lost control of his vehicle, and then crashed head-on another bus. Both drivers were killed and four other people. Ten people were injured.

yet were no children in the school. The driver was on his way to pick up the first children.

It is not clear how the driver could lose control of the school. It looks at whether the driver might have medical problems. According to police the scene of the accident looked like a bomb had exploded.