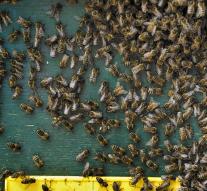 - Three adults and three children in Maricopa, in the US state of Arizona, have ended up in a hospital after they were attacked by a huge swarm of bees. In an adult stabbing were counted in the hospital three hundred.

A news site in Arizona reported Monday that two firefighters who had come to the aid were also stabbed. Which did not undergo any medical treatment. Firemen incidentally had the most work to find the hive where the bees came from. They sprayed the animals with foam to curb them.

According to experts, Arizona is facing attacks from the aggressive African bee, nicknamed ' killer bee ' which is really a cross between an African and a European species. This species is known as someone disturbs life in the hive, he immediately goes on the attack.