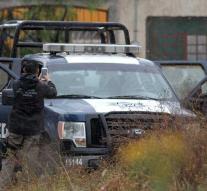 mexico city - Six Mexican agents were shot dead Monday in the western state of Jalisco. It is one of the bloodiest shootings in recent months in Mexico, where the left populist Andrés Manuel López Obrador was sworn in as president on Saturday.

According to public prosecutors in Jalisco, another agent was injured during the firefight in the municipality of La Huerta on the Pacific. It is not known who the perpetrators are, but the place of disaster is the territory of the CJNG (Jalisco New Generation Cartel). The CJNG is one of the most powerful drug gangs in Mexico and very violent.

President Obrador conducted a campaign that revolved around the fight against crime and corruption.