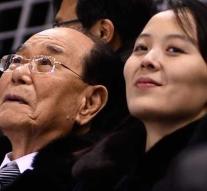 seoul - The sister of North Korean leader Kim Jong-un closed a three-day visit to South Korea. Kim Yo-jong and the other members of the North Korean delegation boarded the plane at Incheon airport, news agency Yonhap.

The visit of Kim Yo-jong was special: it was the first time since the Korean War in the fifties that a member of the North Korean ruling dynasty traveled to the south. During the visit she handed over a message from her brother to President Moon Jae-in, who received an invitation to visit Kim Jong-un.

Analysts suspect that the North Korean rapprochement is meant to drive a wedge between Seoul and Washington. The American vice president Mike Pence stressed on his departure from South Korea that the allies are still on par with the Pyongyang approach.