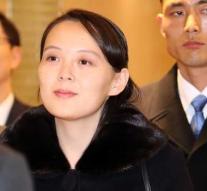 seoul - A North Korean delegation with the sister of dictator Kim Jong-un has arrived in South Korea. The plane with Kim Yo-jong and other top officials landed according to news agency Yonhap at the airport of Incheon.

The delegation is formally led by Kim Yong-nam, the ceremonial head of state of the dictatorship. That the balance of power in practice is different, according to Yonhap, during a meeting with South Korean officials. Ninety-year-old Kim offered Kim Yo-jong the most important chair there. She refused.

The North Korean delegation members later traveled by train through Pyeongchang. There they are expected to attend the opening of the Winter Games. The visit is special: Yo-jong is, according to Yonhap, the first member of the North Korean family dynasty to visit the southern neighbor.