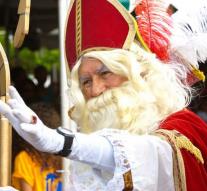 amsterdam - Whoever thought that Santa Claus is a children's innocent is wrong. Parents tell their children stories about Sinterklaas and his helpers can thus harm the confidence of their offspring. For that two psychologists warn in the leading medical journal The Lancet.

Because, as the authors argue, as parents lie about the existence of Santa Claus, then think their children might be that they will lie about other things. Kathy McKay, a clinical psychologist at the University of New England: 'If the myth of Santa Claus (. Or Santa Claus in the US, ed) falls apart, it could cause the already fragile relationship between parent and child is damaged. If parents can convincingly lie extended periods over which they lie then? '

Or should we throw Sinterklaas overboard about differences psychologists in the magazine of opinion. The 3-year-old godson McKay believes in Santa Claus. When the girl would ask her if he really exists, she will tell her that it's a big lie. 'I want them to grow up knowing that we will always be honest with her. '

The other psychologist, Chris Boyle- working at the University of Exeter, is less harsh. 'I'm not going to walk through the streets to distribute leaflets,' says Boyle. It also admits the game itself also will play if he himself had had children.

Boyle recommends that parents be off to Saint Nicholas (or Santa Claus) be used as a punishment or reward. 'Some parents threaten their children with bad behavior that they will get no presents from Sinterklaas. The deployment of a mythical creature is not the best method, 'Boyle judges.